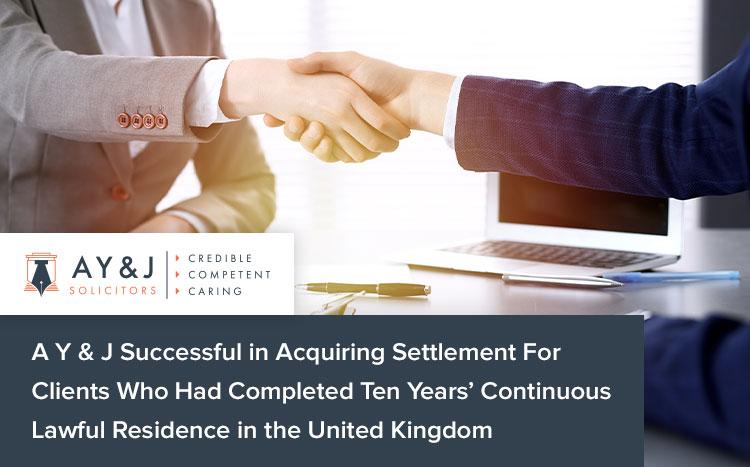 Both Mr A and Mr B first arrived in the UK as a student about 10 years ago.

After graduation, Mr B was granted Tier 1 (Post-study Work) Leave to Remain in the UK. Before the expiry of the leave, he applied for Leave to Remain as a Tier 1 (Entrepreneur) Migrant.  The application was refused, and an in-time appeal was lodged.  The judge of the First-tier Tribunal dismissed the appeal.  Mr B then applied to the First-tier Tribunal for permission to appeal to the Upper Tribunal, and the judge again dismissed the appeal.  During the period, Mr B identified an opportunity to work for his current employer, and they were willing to sponsor him.  Mr B then applied for Tier 2 (General) Leave to Remain, and it was granted.

How A Y & J helped our clients achieve ILR

The key issue in these two cases was whether there was a break in their continuous lawful residence during the last 10 years.

The lawful residence is defined in paragraph 276A of the Immigration Rules as a period of continuous residence in which the applicant had one of the following:

(1) This section applies if—

(a) a person who has limited leave to enter or remain in the United Kingdom applies to the Secretary of State for variation of the leave,

(b) the application for variation is made before the leave expires, and

(c) the leave expires without the application for variation having been decided.

(4) A person may not make an application for variation of his leave to enter or remain in the United Kingdom while that leave is extended by virtue of this section.

(5) But subsection (4) does not prevent the variation of the application mentioned in subsection (1)(a).

“Where an appeal has been allowed the Tribunal in allowing the appeal may have found that the Secretary of State’s original decision was unlawful such that the refusal decision is set aside. This means that the Secretary of State has to remake the decision. The effect on section 3C leave is that it reverts to leave under section 3C (5) during the period between the appeal being allowed and a new decision being made.  As the decision has been set aside, it is possible for the outstanding application to be varied during the period before it is decided.”

In case 1, Mr A’s application Tier 4 application was refused, and an in-time appeal was lodged. The appeal was allowed. Therefore, the application passed back to the Home Office to remake a decision.  Mr A’s Section 3C leave was reverted to leave under 3C (5), and he was allowed to vary his existing application under Section 3 (1)(a). Therefore, his continuous lawful residence was not broken during that period.

(a) the previous application was made before 24 November 2016 and within 28 days of the expiry of leave; or

(b) the further application was made on or after 24 November 2016 and paragraph 39E of these Rules applied.

In case 2, Mr B’s leave in the UK under a Tier 1 (Post-study Work) was extended by Section 3C of Immigration Act 1971 until the date when the appeal to the First-tier Tribunal for permission to appeal to the Upper Tribunal was dismissed.  He submitted a fresh application within 28 days, and it was approved.  Therefore, even if Mr B overstayed in the UK, such a period of overstaying should be disregarded according to Paragraph 276B (v) of the Immigration Rules.

The Result: Both clients received ILR

We were able to show there was no break in Mr A’s continuous lawful residence during the last 10 years, and that Mr B’s period of overstaying should be disregarded according to the Immigration Rules.  With our help, Mr A and Mr B managed to get their ILR within 24 hours.