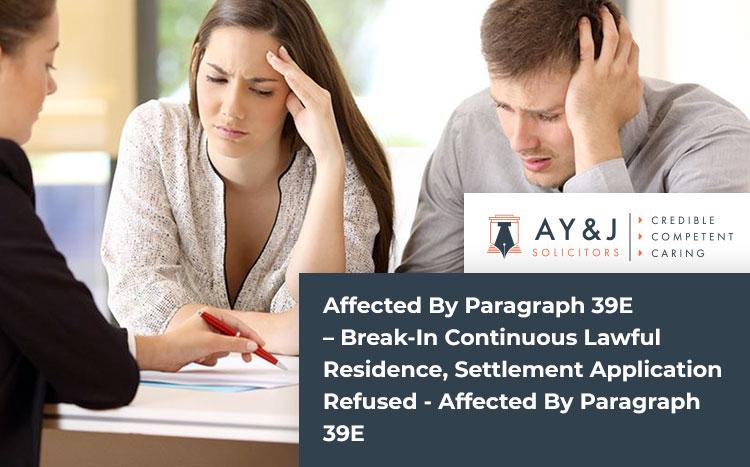 Mr. A then applied for Administrative Review against the refusal decision of his Tier 1 Entrepreneur visa application, which was received on 26 March 2019.  The Administrative Review decision was maintained and completed on 18 April 2019.  Thereafter, 13 days later, on 1 May 2019, Mr. A applied for leave to remain outside the Immigration Rules.  He then varied his application over a month later, while his application for Leave to Remain outside of the rules was still pending, as he had completed 10 years residence in the UK. Unfortunately, his application for Indefinite Leave to Remain was refused by the Home Office.

How Did We Help With His Long Residence Appeal?

Mr A was desperate and in need of legal advice, as he could lose his job, and be forced to return home if his appeal was to be dismissed.  After days searching on Google for a lawyer specialist in appeal procedure, a friend of him referred him to us.  Having reviewed the information, the Home Office decision stated that Mr. A had not demonstrated 10 years lawful residence in the UK because he had not held valid leave since 18 April 2019 (when his administrative review was maintained).  Therefore, on this basis, the Home Office concluded that Mr. A has only accrued 9 years and 10 months lawful residence in the UK and therefore had not demonstrated 10 years continuous lawful residence.

We advised Mr. A to appeal the decision at the First-tier Tribunal on the basis that the Home Office failed to exercise discretion in Mr. A’s favour.  Mr. A had not had any other refusals, and all of his applications since his arrival in the UK had been made in-time, we relied on relevant and recent case law to this effect which emphasised the need to also consider the past immigration history.  The administrative review was maintained on 18 April 2019, and Mr. A made an application for Leave to Remain outside of the rules on 01 May 2019 (within 14 days of the AR decision being maintained).  Therefore, we placed reliance on Paragraph 276B(v)(b) and Paragraph 39E of the immigration rules, which sets out an exception for overstayers.

39E. This paragraph applies where:

(2.) the application was made:

(a) following the refusal of a previous application for leave which was made in-time; and

We submitted an in-time application against the refusal decision at the First-tier Tribunal. On the date of the hearing, the Respondent.

The Result: The Decision to Refuse Settlement on The Day of The Hearing Has been Withdrawn

At the hearing, the Home Office withdrew their decision since it was incorrect in law and Mr. A ought to have been granted leave.  This was on the basis that 39E Immigration rules had not been correctly applied.

The Secretary of State for the Home Department agreed that Mr. A should have indeed been granted Indefinite Leave to Remain, and an error has been made on their side in refusing his settlement application.

Another result for a family who no longer have to worry about their immigration status.  Something for many of us to learn, do not assume that by having only one refusal and submitting an application within the permitted time (Paragraph 39 of the Immigration Rules) the Home Office can disregard this a refuse your application.  Let us help you!!

Blog on Appeal and Administrative Review

Brochure of ILR Under 10 Year Rule