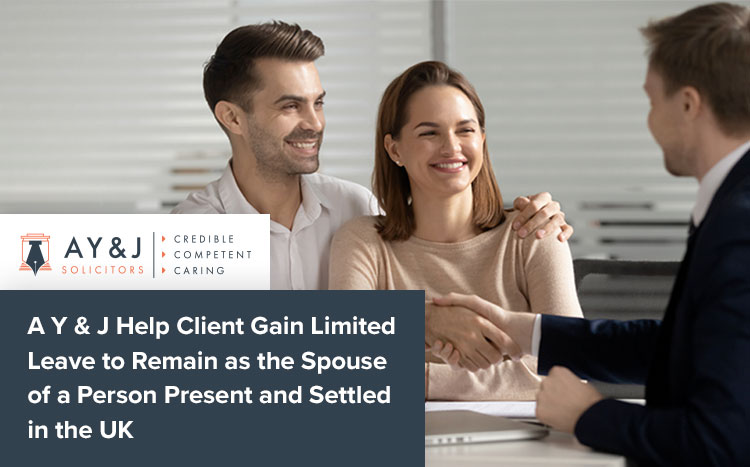 Our client Mrs S met her husband Mr A in 2012; they got married in 2013.  After getting married, Mr A was transferred by his company to their branch in the Netherlands.  Mrs S then applied for a visa and joined Mr A, and the couple had been living there together since.  Last year, Mr A was transferred to the UK by his employer.  After careful consideration and discussion with Mrs S, they decided to relocate to the UK.  Mrs S applied for entry clearance and planned to come to the UK with Mr A.  However, the application was refused due to lack of evidence of their relationship.

After the application was refused, Mr A entered the UK first.  Mrs S then applied for a Tier 2 (ICT) Long Term visa as her company offered her an opportunity to relocate to the UK, and joined Mr A about two weeks later.

Mrs S still wished to apply for a spouse visa.  She then approached us for our advice.

How A Y & J helped our client achieve Leave to Remain

Considering Mrs S’s refusal history, we had to provide sufficient documents evidencing her relationship with Mr A.  To assist Mrs S in succeeding with her application, we prepared a detailed checklist for her, outlining supporting documents she needed for the application; especially the documents showing their relationship was genuine and subsisting.  We obtained a copy of a tenancy agreement and bank statements in their joint name for the period when they lived in the Netherlands.  We also provided evidence of cohabitation in the UK.  In addition, we obtained letters from the couple’s friends and family in support of her application.  Mrs S also provided lots of photos with Mr A and their friends and family evidencing their relationship.  Their marriage certificate and their daughter’s birth certificate was also provided.  After reviewing all the documents, we are satisfied that it is sufficient to prove their genuine and subsisting relationship.

Another important requirement was the financial requirement.  Mr A had been working for his employer for more than 10 years, and his annual salary was more than sufficient.  However, when we reviewed his payslips and bank statements, we spotted a slight discrepancy between the net pay shown in the payslips and the actual amount paid into the Mr A’s bank account.  We requested a letter from Mr A’s employer who explained that it was simply due to rounding of numbers.  As this anomaly had occurred more than once, we were not satisfied with this explanation, but the employer could not give any other explanations.  In our legal representations, we explained the situation and argued that the net amount should be counted according to Paragraph 1 (k) of Appendix FM-SE if the Home Office did not accept the gross amount as shown in the payslips.  Even if only the net amount was counted, Mr A would still meet the requirement.

Paragraph 1 (k) Where the gross (pre-tax) amount of any income cannot be properly evidenced, the net (post-tax) amount will be counted, including towards a gross income requirement.

The Result: Our client successfully received leave to remain