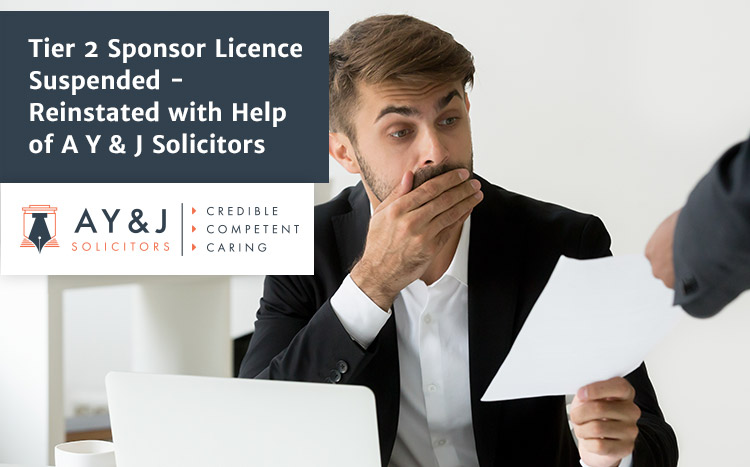 Tier 2 Sponsor Licence retention is important for many companies as it is business-critical. Company Y is an IT and Business Consulting organisation which had been established for more than 8 years. They specialise in Microsoft Technologies, SharePoint, CRM Dynamics, Software Testing etc. Since acquiring a sponsorship licence more than 2 years ago to support rising resource demand from their clients for the required niche skills, Company Y experienced a 42% growth.

In late 2017, Company Y was visited by representatives of the UK Visas & Immigration (UKVI) on at least two occasions to assess its continued suitability as a registered sponsor. Following the compliance visit, their Sponsorship Licence was suspended.

The UKVI further alleged that Company Y had failed to demonstrate that they had a robust system in place to accurately monitor any non-attendance of their sponsored workers. Company Y was required to make representations within 20 working days to address the Home Office’s concerns.

The complexity of addressing the “genuine vacancy” requirement was the main concern because UKVI applies subjective tests to the questions of what a “genuine vacancy” is that are often vague.  Failing on the “genuine vacancy” requirement has harsh consequences as it is a mandatory ground for revocation of a Sponsor Licence. If Company Y lost their Sponsor License, they would lose 75% of their skilled IT workforce. They would be forced to turn away new work from existing clients and would struggle to gain new business without the continued presence of their key IT employees. This would cause a serious blow to the company, not to mention their employees facing unemployment.

Company Y came to A Y & J Solicitors for advice on how to retain their Sponsor Licence and skilled foreign workforce. We provided detailed advice on the information and documents required to address the” genuine vacancy” issue and other issues that were raised by UKVI such as allegation of false information and the Migrant Tracking & Monitoring duty. We reviewed the documents provided by Company Y, and prepared and submitted the representations on behalf of Company within the 20-day time frame.

Less than a month after submitting the representations, Company Y was notified by UKVI that their Sponsor Licence had been reinstated as UKVI was satisfied that the issues raised had been addressed. The director of Company Y was relieved as he was at risk of losing his existing skilled workers, his existing client’s and no longer had to fear that his business would stop growing.

Fortunately, Company Y used the Sponsor Licence expert team at A Y & J Solicitors to advise and assist with their case to fight to have their suspension revoked.  As a result, Company Y and its workforce can now continue to grow and are secure in the knowledge that following A Y & J’s intervention, they can continue to operate a, successful and fully compliant business.