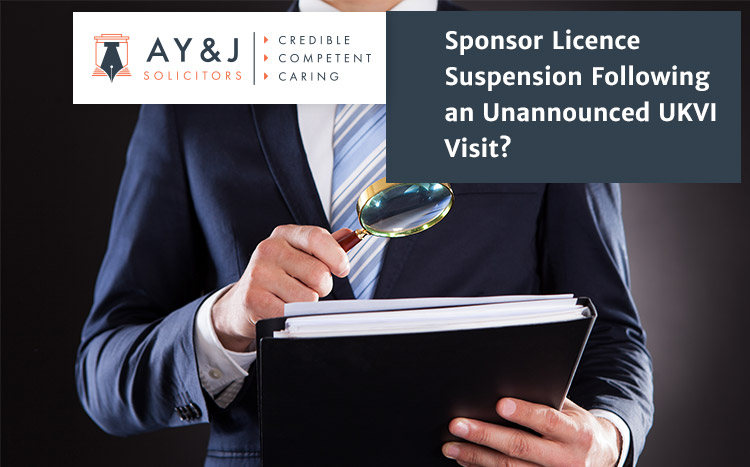 Sponsor Licence suspension is critical event to the business. UK courts have determined that holding a Sponsor Licence is a “privilege” and not a right. The essence of the Sponsor Licence system is that imposes “a high degree of trust” in those who are becoming sponsors, and that the authority to grant a CoS is “a privilege which carries great responsibility.” Therefore, the burden on Sponsors to play an active role in support of immigration control is a heavy one.

Company A applied for and received a Sponsor Licence almost four years ago. During their four years as Sponsors, the company was visited once by compliance officers. At the time all went well, and the company retained their Sponsor status.

Since the assignment of Sponsor Licence status, the company employed over 90 settled staff members and 5 Sponsored Migrant Workers who were, in fact, the backbone of the company. About 6 months ago, the company received an unannounced Home Office compliance visit to assess their suitability as a registered sponsor. During the visit two of the company’s sponsored migrant workers were interviewed along with the Director. Following the unannounced visit, a second, announced visit was scheduled for further checks on compliance.

These visits resulted in a suspension of the company’s Sponsor Licence with immediate effect on the following grounds:

As a standard procedure, the Sponsor was offered 20 working days to reply to the allegations and provide evidence to demonstrate that the above allegations were incorrect.

The company approached A Y & J Solicitors 10 day prior to the submission deadline, when they realised they wouldn’t be able to save the company and their Sponsor Licence without legal assistance. Initially, we had a consultation over the telephone where we talked through the process, consequences, and results, as well as how we could overcome the challenges. It was obvious that there was much to do to retain the Licence, and without it their migrant workers had to leave the company. A loss of these five members of staff would mean a loss in revenue, slow progression, and potential closure of other branches of the business.

Following the consultation, A Y & J Solicitors received instructions to proceed with the suspension matter. A dedicated and experienced member of our Sponsor Licence team was assigned to their case. We gave hours in advising on the evidence required to defend the existence and genuineness of the vacancies, followed by presenting the evidence to the Home Office.

While preparing a defence to the allegations, we identified that the company had also employed a migrant worker who did not have the relevant Visa to have been employed in the position required by the company. This employee had to be dismissed, however this turned out to be an important step in retaining the right to Sponsor migrant workers. The action itself was referred to in the reinstatement letter. It is essential that a Sponsor understands the nature of a migrant worker’s visa to avoid any breach of compliance. It is a matter of understanding the issues, adducing the relevant evidence and making references to the relevant Home Office Policy Guidance. An important part of our work with Sponsor Licence holders is providing them with clear information on UKVI compliance so they can avoid future challenges.

Quality (Not Quantity) of Evidence is the Key

Once again, good preparation and expert advice on the adequate evidence assisted the company in retaining their Sponsor’s Licence.

Once again, good preparation and expert advice on the adequate evidence assisted the company in retaining their Sponsor’s Licence. It has been proven again and again it is not about QUANTITY of evidence but QUALITY of the evidence in such matters.

We are proud our involvement retained this company’s Sponsor Licence and the status of their 5 Sponsor Migrant Workers!!!

With a bespoke compliance audit, A Y & J Solicitors will offer the following success in this matter: it will make the company’s HR team aware of any gaps in compliance that they have and how to address these so in the future they can avoid suspension matters. Contact us today on +44 20 7404 7933 and let us help you protect your Sponsor Licence.