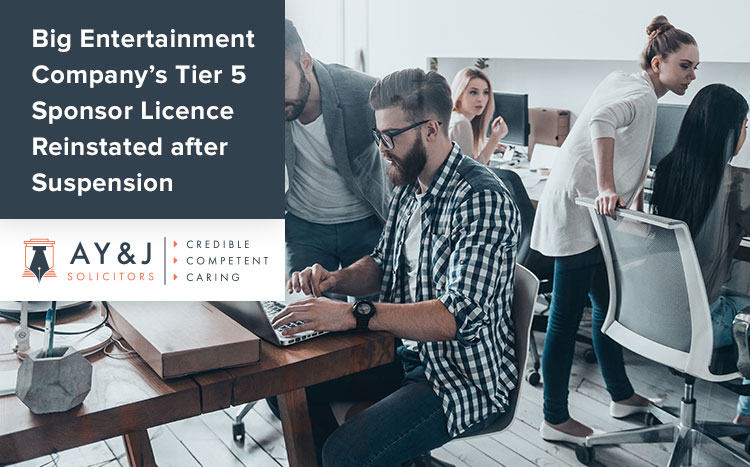 Company E is a record label and artist management company providing multi-media production services to the South Asian entertainment and creative sector internationally. Since it was founded in 2008, Company E has been providing talent promotion, artist development for UK acts, and musical career management services to individuals. Over the years, they have become a market leader in the South Asian music and film industry. By holding a Tier 5 (Creative and Sporting) licence, Company E has played a major part in bringing internationally renowned Indian international artists and celebrities to the UK for concert performance and music/video productions.

In mid 2017, Company E was visited by representatives of UKVI to assess its suitability as a registered sponsor. Following the compliance visit, their Tier 5 Sponsor Licence was suspended mainly due to the lack of evidence provided to the UKVI to demonstrate that the sponsored workers in question were of international status, and that they were paid in line with the rates stated on their CoS. Company E was required to make representations within 20 working days to address the UKVI’s concerns. 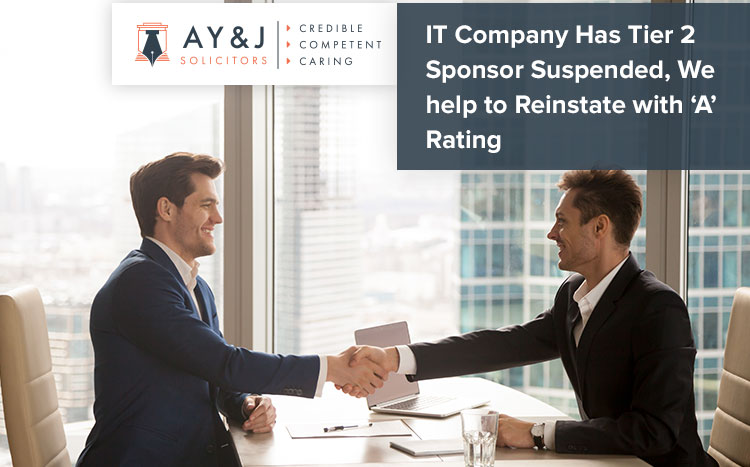 IT Company Has Tier 2 Sponsor Suspended, We help to Reinstate with ‘A’ Rating

As a Tier 5 (Creative and Sporting) sponsor, they do not have to be the person paying the sponsored workers. The complication of this matter is that there is a gap in the Tier 2 and 5 Sponsor Policy Guidance regarding the type of documents required to fulfil the sponsorship duties and ensuring the sponsored workers are being paid in accordance with their CoS.

Company E has been working to promote the UK as the ideal location for artistic works to take place.

Company E has been working to promote the UK as the ideal location for artistic works to take place. Having its license revoked would have a negative impact on the cultural and artistic projects of Company E. If they were to lose their Tier 5 (Creative and Sporting) licence the reputation and brand they have taken years to establish would be damaged. Company E has worked extensively to become a market leader in the South Asian music and film industry and loss of their Sponsor Licence would cause a serious blow to the company. The loss of their licence would also have a negative effect on local employment through ancillary services, which relies on projects taking place in the UK.

A Y & J Solicitors was contacted to provide urgent expert assistance to Company E, so they would not lose their Tier 5 Sponsor Licence. We provided detailed advice on the information and documents required to address the issues raised in the suspension letter. We reviewed all the documents provided by Company E, and prepared and submitted the representations pack on behalf of Company E before the UKVI deadline.

About a week after submitting the representations, Company E received a decision from the UKVI informing them that their Tier 5 (Creative and Sporting) licence has been reinstated. The UKVI was satisfied that the issues raised had been fully addressed. The director of Company E was relieved that the risk of not being able to continue to sponsor international acts and celebrities to come to the UK for performance or music productions was no longer a concern. Company E now continues to work with UK government agencies to assist in promoting the UK as the choice for artistic works to take place.