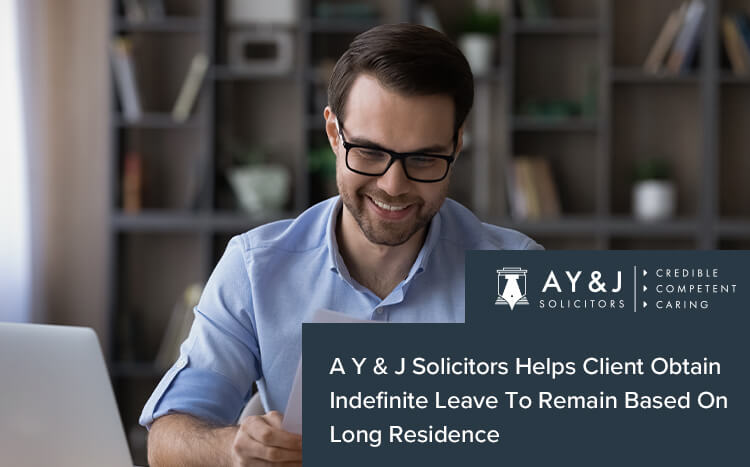 Mr A entered the United Kingdom in 2009, being granted leave to remain as a student, and later securing an extension of his leave as a student until 2015.  Mr A then applied for leave as a dependant of a Tier 4 Student, valid until 30 April 2017.  Subsequently, he was granted Leave to Remain as a Dependent of a Tier 2 Migrant (his wife being the Sponsor) valid until May 2020.

Mr A approached A Y & J to assist with an application for Indefinite Leave to Remain.

On reviewing his case, we were satisfied that all of Mr A’s prior applications had been made in-time and that there were no breaks in his continuous lawful residence in the UK for the past 10 years.

We advised Mr A that he was able to apply for Indefinite Leave to Remain 28 days before the qualifying date of him reaching 10 years lawful continuous residence.  Mr A informed us that the relationship between him and his wife had broken down irretrievably.  We advised him that as he was applying for ILR in his own right, having completed 10 years continuous lawful residence, this would not be a factor in his application.

Preparing the application and accompanying evidence

Based on the initial consultation, we agreed to prepare Mr A’s application form, including reviewing his supporting evidence and requested further evidence in support of his application. We also prepared detailed legal representations on behalf of Mr A, which were submitted along with his application.

We advised Mr A that as a part of the long residence requirements, he was required to satisfy the English language requirement and complete the life in the UK Test.  He was advised that he could prove his knowledge of English either by having a recognised English language test from an approved test centre or by having a degree that was taught or researched in English.  Mr A provided us with his master’s degree Certificate and life in the UK test.

Satisfying the time in the UK and character requirements

One of the key checks we undertook was to review Mr A’s travel history over the last 10 years to ascertain his absences, to ensure he meets the requirements.  We informed him that he should not have been away from the UK for more than 540 days over a period of 10 years or more than 6 months at any one time.  We also informed him that there should not be any concerns regarding his character and that he should be free from any criminal or civil convictions in the UK or abroad.  From the information Mr A had provided us, and by checking the travel stamps within his passports, we were satisfied that he had not been outside of the UK for more than 540 days within the 10 year period and had not spent more than 6 months outside of the UK at any one time.

Mr A opted for Super Priority Service, where a decision on his application would be made within 24 hours.  Once the application had been submitted by us, we uploaded Mr A’s supporting evidence and documentation onto the UKVCAS website. Mr A then attended the appointment which we had arranged on his behalf at the Visa Application Centre.

The Result: Our client was granted ILR the same day

Only a few hours later after his appointment, Mr A was notified that his application had been successful and Indefinite Leave to Remain had been granted.  Less than a week later, Mr A received his Biometric Residence Permit.