Indefinite Leave to Remain (ILR) is also referred as Permanent Residence or Settlement. It can be considered as a very important immigration application for the migrant. Moving to a new country can feel like a tremendous risk and those who choose to take it generally give their all to creating a good life in their new home. For those who come to Britain, obtaining Indefinite Leave to Remain provides a sense of certainty that all the time and money invested in coming to the UK has paid off and they are now part of the community.

Obtaining a settlement is also a requirement for applying for British Citizenship, the goal of many migrants.

Acquiring settlement provides a host of advantages. Alongside the feeling of fully belonging in the UK, having Indefinite Leave to Remain means you are free from any visa restrictions (for example, to earn a minimum salary) and can travel freely in and out of the country.

However, with UK Visas and Immigration (UKVI) can refuse visa applications, the slightest mistake can result in your Indefinite Leave to Remain being rejected.

The newspapers are full of horror stories of people being refused Indefinite Leave to Remain for seemingly trivial reasons. In 2017, Dr Kevin Parsons, University of Glasgow biodiversity lecturer was threatened with deportation after his Indefinite Leave To Remain application was refused. Dr Parsons told reporters the UKVI advised him to apply for ILR before his wife because he was in the UK as a ‘dependent’ under her ancestry visa. This advice turned out to be incorrect. Instead, immigration officers should have told Dr Parsons and his wife to file jointly for Indefinite Leave To Remain, and she could apply for British Citizenship later on.

“I immediately thought that this was a mistake that they made that could be corrected by them without much issue,” Dr Parsons said.

“It then seemed to me that the immigration system was designed to create failures. So while the government doesn’t outright refuse you, they install barriers with timelines that can’t be met if anything goes wrong”.

Thanks to the intense public support and the advice of an experienced immigration lawyer, Dr Parsons was granted settlement.

The above scenario illustrates how precarious the process of applying for Indefinite Leave to Remain can be. If your leave expires during the process, you may be forced to leave the country. Another example of the ridiculous situation some people find themselves in is illustrated by the case of a Zimbabwean couple who were refused Indefinite Leave to Remain because they did not take the English language test, despite English being their first language.

The couple told the Derby Telegraph – “We have supported ourselves since arriving in the UK. We both passed the Life in the UK test and were told that we would be informed if we needed to take the English language test, which is no more than sitting in a room conversing to someone for five minutes.”

“By the time we were told that we had to take the test, the Home Office had retained our passports, and you need your passport before you can sit the test. It is a misunderstanding but one that has cost us dearly”.

To assist you with applying for Indefinite Leave to Remain, here are our three top tips for increasing your chances of a successful application:

There are several pitfalls in the Indefinite Leave To Remain process that can quickly turn into disastrous consequences for the applicant. It is therefore imperative that you invest inaccurate legal advice before submitting your application so that any problems are detected well in advance.

Our team is well known for assisting clients all over the world with their settlement applications. At A Y & J Solicitors, we have a five-star rating on Trustpilot and a well-established reputation for successfully obtaining a settlement for clients, especially those whose cases are not completely straightforward.

Client says, “The experience and the professionalism displayed by the staffs and the case handler of our ILR application was highly commendable and indeed an excellent service.

I would always recommend this company for any and all your immigration needs.

Right from the first contact until the end of the job, they were approachable and keen to respond politely with facts. My doubts and all questions were answered promptly with high level of accuracy and sincerity. I would always recommend this company for any and all your immigration needs. This company knows there job very well”.

To be eligible for Indefinite Leave to Remain you need to meet the continuous residency requirements. As a general rule, an applicant must not have been absent from the UK for more than 180 days over a 12-month period.

There are some absences which, if they result in you being outside the country for more than 180 days, are allowable. Allowable absences must be for a reason consistent with the original purpose of entry to the UK, or for a serious or compelling reason. They are permitted in the following categories:

Even a few days extra absence could result in your application for settlement being denied. Make sure you monitor the time you spend outside the UK and keep within the continuous residency requirements.

Three – For Those Applicants on a Tier 2 Visa, Check you are Being Paid Enough

From April 2016, NON-EU migrants in the UK on a Tier 2 visa will need to earn at least £35,000 to qualify for Indefinite Leave to Remain. At A Y & J Solicitors, we have assisted Applicants with complex issues while on a Tier 2 General to obtain the settlement.

Some jobs, such as nursing, are exempt from the rule.

Both employers and employees lose out if a skilled worker leaves the country simply because they do not meet the minimum salary requirements. If you are not being paid enough to apply for settlement, you need to have a frank conversation with your employer well before your current leave expires. Alternatively, you may need to find a better-paid position with another UK Sponsor Licence holder.

For assistance with all matters relating to Indefinite Leave to remain, talk to one of our team for friendly, practical, accurate advice. 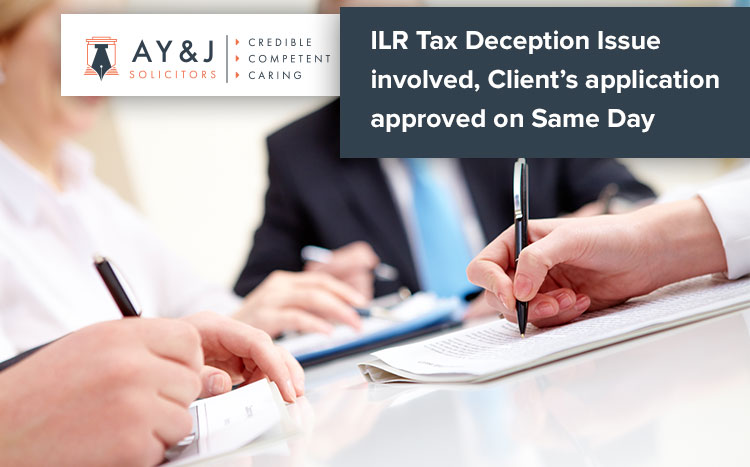 Brochure on Indefinite Leave to Remain