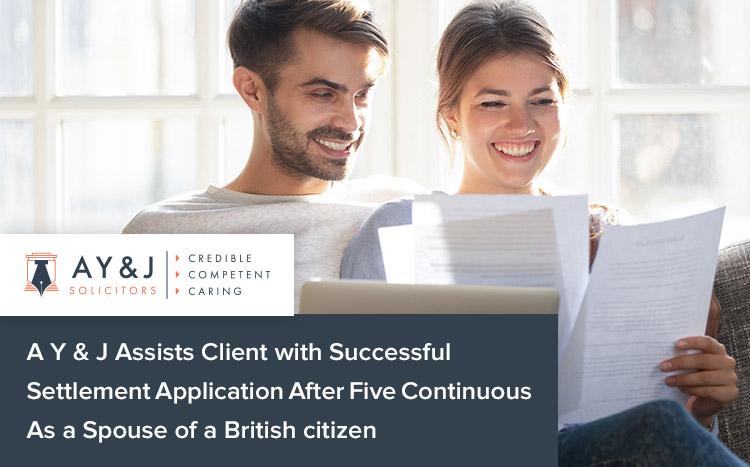 Mr K met his wife, a British citizen, many years ago in his country of origin, after which they married and moved back to the UK.  Mr K approached us to assist him with his settlement application upon completing a continuous period of five years as a spouse of a British citizen.

How A Y & J helped our client achieve settlement?

Mr K had to satisfy all of the requirements stated in Section R-ILRP of Appendix FM of the Immigration Rules.  One of the critical requirements to be met was the minimum income threshold without dependent children of £18,600.

There are different categories that the applicant can rely on to meet the financial requirement; categories A and F were most relevant to Mr K’s application.

Category A is the income from salaried/non-salaried employment.  Under this category, the applicant only needs to prove that his gross annual salary is above the minimum income threshold.

Category F is the income from the last full financial year as a director of a specified limited company.  Under this category, applicants need to provide many documents in relation to the company; a much more onerous task.

We tried to rely on Mr K’s income from his salaried employment.  However, we came to know that Mr K was the director of the company at the same time.  According to the Immigration Rules, (as per below) we had to prove that the company was not of a type specified in paragraph 9(a), otherwise, category F would apply.

“Paragraph 2(d) Where the person is a director of a limited company based in the UK, evidence that the company is not of a type specified in paragraph 9(a). This can include the latest Annual Return filed at Companies House.

(a) The specified type of limited company is one in which:

(i) the person is either a director or employee of the company, or both, or of another company within the same group; and

(ii) shares are held (directly or indirectly) by the person, their partner or the following family members of the person or their partner: parent, grandparent, child, stepchild, grandchild, brother, sister, uncle, aunt, nephew, niece or first cousin; and

(iii) any remaining shares are held (directly or indirectly) by fewer than five other persons.”

Navigating the complex rules around company ownership and shareholding

In this case, Mr K is the director of company A, which, in turn, is a 100% subsidiary of company B.  But Mr K owns shares of company B, therefore Mr K indirectly holds company A’ shares.  We then had to find out whether remaining shares are held (directly or indirectly) by fewer than five other persons.  Luckily, company B is a public limited company, and there are more than five shareholders.  We provided an employment confirmation letter, payslips and Mr K’s bank statements as evidence of his employment.  We also provided company A’s latest annual return and a letter from Company B, confirming its shareholding structure.

Regarding the evidence of the relationship, we provided the couple’s marriage certificate and their children’ birth certificate. We helped Mr K to collect several items of correspondence addressed to his him and his wife at the same address since he was granted his last leave as a spouse of a British citizen; this was very helpful in showing the genuineness of their relationship.

After reviewing Mr K’s documents, we assured him that the application had a good chance of success.

We then helped Mr K to book an appointment for super-priority service and uploaded all documents in advance.

Result: Our client received confirmation of settlement the same day

With our help, Mr K received the decision on the same day, and his new BRP arrived one day later.

Linkedin
Previous StoryStudent With Undesirable Immigration History Approaches A Y & J Solicitors
Next StoryHow A Y & J Solicitors Assisted an EU National to Enter The UK Despite Her Being Refused Entry at The Border?