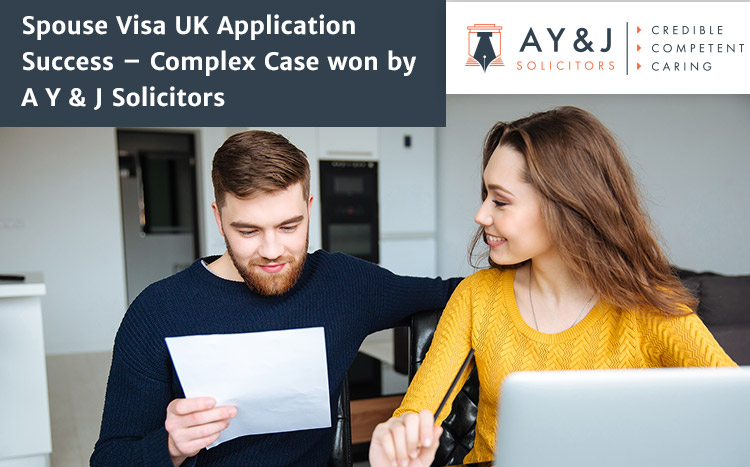 Mrs Z, a Non-EEA national, arrived in the UK almost 12 years ago to pursue her dreams of studying in the UK. Due to family issues, her circumstances changed while in the UK and she could not pursue her studies. As a result she was unable to extend her stay in the UK as a student once her Student Visa had expired Mrs Z became an over stayer.

Years later, Mrs Z to attempted to regularise her status because of the struggle she was facing being an over stayer. While in the UK, Mrs Z met Mr B, a British citizen who she then married.  She approached various immigration advisors, and on their advice submitted a human rights application. This application had weak merits. Her application was refused, and she was later detained by the Secretary of State.

At no point while making human rights applications was she advised by her previous immigration advisors to disclose the relationship with her partner, because they felt there wasn’t enough evidence to show that they have been living together for the last 2 years.  This wasthe starting point of her challenges. Had adequate advice been given she could have avoided the refusals of many of her applications and suffering the horrors of being detained in an Immigration Removal Centre.

Following her release from detention, Mrs. Z was advised that the only way she could regularise her status was to return to her home country and apply for entry clearance as a spouse of a British citizen.  The process of entry clearance should have been quite a simple one, however it was not.

Mrs. Z and her sponsor instructed a regulated advisor to assist them with preparing her application for Entry Clearance. As Mrs. Z was abroad, their communication mainly took place over the telephone and via emails.  One of the many questions on the application form asks if you have ever used the NHS services whilst in the UK.  Given the number of years Mrs. Z had been in the UK it was inevitable that she did. Unfortunately, despite disclosing this to her legal advisor, she was advised that it would be better not to disclose this information as it would lead to a hefty NHS bill.

The application and supporting documents were submitted at the British Embassy, and surprisingly or perhaps “unsurprisingly” it was refused in accordance with Paragraph E-EC 1.5 of Appendix FM of the Immigration Rules.

The application and supporting documents were submitted at the British Embassy, and surprisingly or perhaps “unsurprisingly” it was refused in accordance with Paragraph E-EC 1.5 of Appendix FM of the Immigration Rules. The main reasons for refusal were her past immigration history, the claimed relationship, and non-disclosure of use of NHS services. It was a messy refusal letter, and Mrs. Z and her family lost hope of her returning to the UK. The refusal meant a long separation from her loved ones including her husband, who was forced to live for months away from his wife.

Having had a bad experience with the Home Office and looking for an effective solution, Mrs. Z and her family approached A Y & J Solicitors to seek a legal opinion on their mater. During the consultation, a member of our legal team identified that many of the documents and vital information had not been provided to the Entry Clearance Office, had she been advised to provide an explanation as to why she had previously overstayed, why she had previously failed to disclose her relationship with her British national husband and to admit to the use of the NHS services the outcome would have been very different.

The open and honest assessment of the case provided by Y & J Solicitors legal team at the time of the consultation gave enough faith and trust to Mrs. Z and her family to let A Y & J Solicitors handle her matter.

The case was assigned to one of our experienced caseworkers, who not only assisted in collecting more evidence but maintained open communication with Mrs. Z and her family, keeping them informed of the steps taken in her case. As this was a refusal of an entry clearance application, we had another chance of getting this decision overturned by an Entry Clearance Manager if adequate legal arguments and evidence were put forward to the reviewer. This would mean that Mrs. Z and her family would not have to attend an appeal hearing and would save time and costs of her travel to the UK.

The entry clearance review grounds were prepared and within a few months a hearing date was given to Mrs. Z. However, the hearing never proceeded as the Entry Clearance Manager (ECM) reviewed the decision and offered to withdraw the initial decision. Many people would be happy with this decision, thinking that the visa was to be granted.  But the legal battle did not end there. The offer provided by the ECM was not in the best interests of our client. Whilst it was a generous offer, we believed that it would only be fair if the ECM stated that leave was to be granted following reconsideration of the decision. Our aim was to avoid a situation where the ECM would review and then issue a new refusal letter. This would cause the scheduled appeal date to be lost, and our client would have to wait another 12 months for a new appeal to be listed.

Following numerous correspondence exchanges with the court and the ECM, the court directed the ECM to comply with the Appellant’s request, and stated that the appeal hearing would proceed unless leave was granted Within a few days our client was invited to pay the required IHSfee and to submit her passport and TB test to the nearest visa centre. There would be no further court hearings—her visa was being granted!

Had this family received comprehensive detailed immigration advice from the beginning, there would have been no struggle for such a long period of time. Fortunately, as a result of our hard work, Mrs. Z was finally able to join her husband and family without the need to attend a court hearing. A Y & J Solicitors succeeded at the ECM review, where most reviews are ignored or not considered.

A Y & J Solicitors is committed to successful outcomes for our clients. For any UK immigration issues, please contact us today at [email protected] or on +44 20 7404 7933. We’re here to help.

Spouse Visa UK – Top Three Tips while Applying for it

I had recently applied for spouse visas through A Y and J Solicitors. Yash has indeed years of special expertise in this field and guided me with the right set of documents especially when its a self employed case. A highly knowledgeable person, very professional, extremely talented and friendly person. Diana as well, very thorough with her bits, very knowledgeable and eye for detail , absolute perfectionist. Everyone at office are helpful and indeed friendly. I would 100% highly recommend AY&J Solicitors services Excellent Services delivered by highly talented professionals.