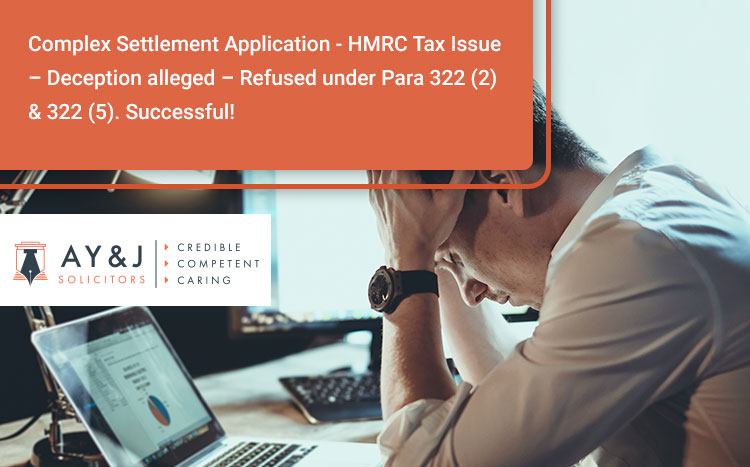 While he was on Tier 1 (General) visa Mr V established a UK Limited company from which he was withdrawing a salary and dividend income. Each time he extended his leave to remain on his Tier 1 (General) he provided evidence of his previous earnings in the form of dividend vouchers and salary slips. Without knowing that Home Office reviews these earnings statements against HMRC records, Mr V submitted an application through the SET (LR) form, again claiming his salary and dividend income. The application was refused by UKVI with reference to paragraph 322 (5). The general grounds for this refusal refer to the character and conduct of an Applicant, and alleged tax deception.

Having received the refusal letter and not knowing how to challenge the allegations made by UKVI, Mr V searched for legal representatives with expertise in this area. He attended an in-person consultation with one of our experts in the field who advised that it was in his best interests to submit a new application rather than appealing the UKVI decision.

At the time that Mr V’s application was refused, he still had valid leave to remain. Therefore, if he was to exercise his right of appeal his section 3C would have been terminated on the day his leave was to expire. Without this section 3C in place, Mr V would not have been able to carry on working and supporting himself and his family financially. Our team of experts advised Mr V to instead submit a new SET (LR) application and provide additional evidence and information regarding the discrepancies in income that had been questioned by the Home Office.

We worked hard on Mr V’s behalf running legal arguments and liaising with his accountant and HMRC to ensure that we could secure his settlement. He needed to promptly file amendments of his income with HMRC and ensure that the amounts he was claiming were consistent across departments. The amount of tax liability generated by the amendments was significant.

As a result of the complexity of the case, Mr V was invited on two separate occasions to submit additional evidence and explanations regarding the amendments.

As a result of the complexity of the case, Mr V was invited on two separate occasions to submit additional evidence and explanations regarding the amendments.

Once again our team’s knowledge and expertise with respect to the challenges of HMRC tax discrepancies greatly benefitted our client. We managed to secure his settlement at a time when many applicants are failing and having their applications refused.

If Mr V had proceeded with the appeal, he could have been prevented from continuing his employment and he may not have succeeded in his appeal since he was not aware of the documents he should have provided to overcome Home Office’s allegations regarding his character and conduct.

We are an experienced team. We understand the complexities of this kind of immigration matter, and we care about finding the right solutions for our clients. Our dedicated lawyers work tirelessly to bring the best possible outcome in every single immigration application we make.