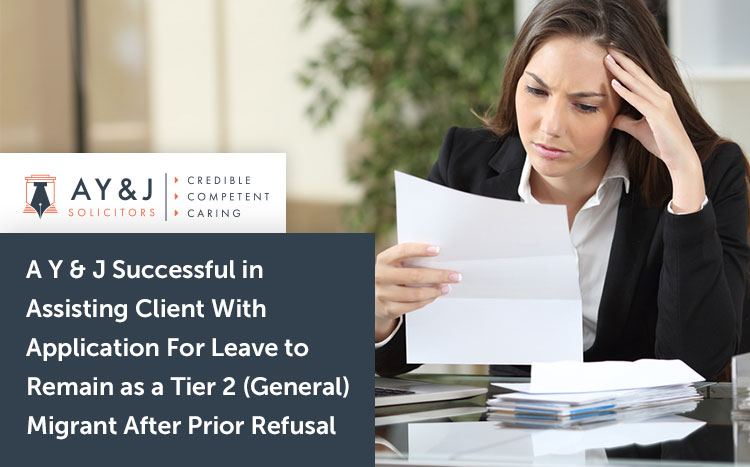 Our client, Miss A first arrived in the UK as a Tier 4 General student migrant.  After completing her study in the UK, Miss A found a job in the UK.  Her employer was willing to sponsor her Visa application.  Miss A then submitted an application for a Tier 2 General before the expiry of her previous leave.  Unfortunately, the application was refused on the date which her leave was expired, leaving Miss A concerned and deeply frustrated.  However, despite her setback, she did not give up and contacted us for advice in relation to her immigration issue

How A Y & J helped our client achieve leave to remain

During the consultation, we reviewed Miss A’s refusal letter carefully.  We discovered that Miss A’s application had been refused because the salary included in her Certificate of Sponsorship (CoS) was not at or above the appropriate rate of the job, as specified under Appendix A of the Immigration Rules.  However, we also learned that Miss A’s employer had chosen the wrong SOC code for Miss A’s role.  We contacted Miss A’s employer regarding the issue and explained that if they could correct the SOC code and the salary and assign a new CoS, we would be able to submit a fresh Visa application which had a good chance of success.  Miss A’s employer agreed to assign a new CoS.

Read More
We then helped Miss A’s employer to choose the correct SOC code and the salary.  We also reviewed all the information in the CoS, ensuring everything was correct.

Handing the issue of overstaying

While waiting for the new CoS, we prepared for Miss A’s fresh application.  However, during this time, we found out that Miss A’s previous visa had expired, meaning she was overstaying in the UK.  We had to address the matter carefully.


According to paragraph 39E of the Immigration Rules, there are exceptions for overstayers.

We then helped Miss A obtain all of the documents she needed for the application and prepared a detailed legal representation addressing her previous refusal and the period of overstaying. We also highlighted Miss A’s relevant qualification and experience to demonstrate she was appropriately qualified and suitable for the role.

Next, we helped Miss A book her appointment for super-priority service and uploaded all documents in advance.

The Result: Our client was granted residency on the same day as applying

With our help, Miss A submitted her application with ease and received the decision on the same day.  Miss A’s application was approved without further enquiries from the Home office, and her new Biometric Residence Permit (BRP) arrived a few working days later. 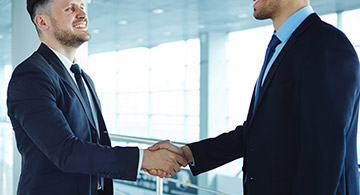