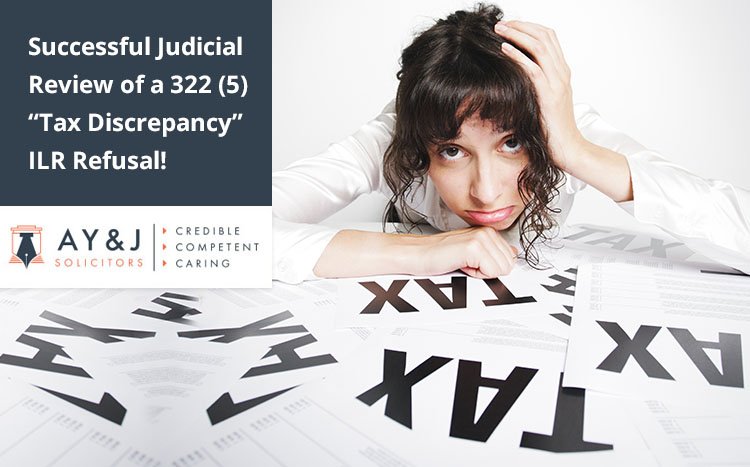 R (on the application of Farooq Shaik) v Secretary of State. Successful Judicial Review of a 322 (5) “Tax Discrepancy” ILR Refusal!

This  news report states that many ILR applications are getting refused under the Paragraph 322 (5) due to tax discrepancy and amendments. It is possible that innocent visa applicants face refusals. We believe that genuine applicants are entitled to justice.

On Monday 3rd September 2018, the UT Judge delivered judgment in the Upper Tribunal in the case of R (on the application of Farooq Shaik) v Secretary of State for the Home Department quashing the decision of the SSHD to refuse the Applicant settlement.

The case was a challenge against an unlawful decision of the Secretary of State for the Home Department to alleged deception under Paragraph 322 (5) of the Immigration Rules.  Further, it dealt with Paragraph 19 of the Appendix A of the Immigration Rules.  These were not the sole issues raised in this battle – there was the added issue that the applicant failed to provide “specified evidence” in respect of his absences during the period he was a Tier 1 (General) Migrant. 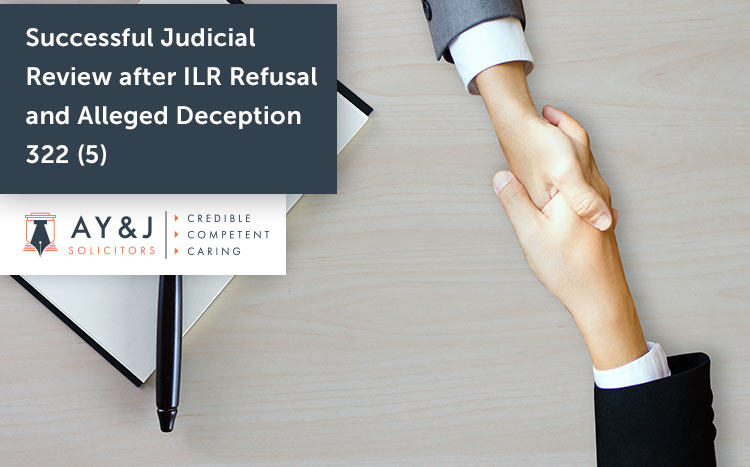 Mr S arrived in the United Kingdom as a Student and continued his residency in the UK as a Highly Skilled Migrant.  Upon completing the five-year qualifying period as a Tier 1 (General) Migrant, he decided to settle in the United Kingdom.  In June 2016, he applied for an Indefinite Leave to Remain Visa.  While his application was being considered, Mr S was issued with the standard questionnaire by the SSHD requesting information regarding his financial activities during his period as a Tier 1 (General) Migrant.  Despite providing enough information and evidence of his financial affairs in the questionnaire, the SSHD still issued a refusal letter notifying the Applicant that he failed to meet Paragraph 322 (5) of the Immigration Rules.  As pointed out by the UT Judge in the judgement:

“The reasons for refusal on this ground are brief and somewhat non sensical given that the decision states that he did “not meet Paragraphs 322(5) (sic)” An overall reading of the decision indicates however that the respondent relied upon the findings on the second point to justify refusing the application under paragraph 322(5).”

Further, the refusal referred to Paragraph 19 of Appendix A of the Immigration Rules which relates to the assessment made on the Applicant’s earnings.  Due to a one-off discrepancy in Mr S’s financial tax year for 2010/11, the SSHD asserted that he had either undeclared his earnings to HMRC or inflated his earnings in his leave to remain application to obtain leave.  Not only had the SSHD failed to consider the evidence before him in relation to the error made, and the other factors which would indicate that the Applicant is a genuine High Skilled Migrant having worked for several years as a Director of a Limited company, he also mistakenly classified the Applicant’s other tax years as containing errors.

Had the decision maker fully considered all the evidence, the outcome of this case could have been significantly different.  Preventing the material error could have changed the dynamics of the Applicant’s case.

The refusal also included an allegation of failure to provide specified evidence as is required Paragraph 245CD(d)(ii) & 245AAA(c) of the Immigration Rules.

Pursuing the only route available to challenge a refusal of a PBS application, an Administrative Review Application was submitted challenging the SSHD’s decision.  In our experience, it is rare that the decision gets overturned in likewise cases.  In this case, not only was the decision maintained but with a few amendments to the refusal wording.

As part of the Judicial Review proceedings a Pre Action Protocol letter was sent requesting for the SSHD to review his decision.  The Pre Action Letter had a similar outcome as many 322 (5) cases where the decision to refuse stands.  An Application for Permission to Judicially Review the SSHD decision was issued. The UT Judge granted permission at a hearing finding that the SSHD failed to consider relevant evidence which might have supported the Applicant’s account of events.  Despite the positive outcome at the oral permission hearing, the SSHD defended the matter further and filed Grounds of defence which he relied upon at the substantive hearing.

“it was incumbent on the respondent to consider all relevant factors in the round including those that might support the applicant’s claim that he was careless and not dishonest in his tax affairs.”

At the substantive hearing the Upper Tribunal held that the SSHD “did not give specific reasons for refusing the application under paragraph 322(5) of the immigration rules, but instead relied wholly on the findings made about the credibility of the applicant’s claimed earnings with reference to paragraph 19 of Appendix A.  Further , the instructed counsel for the GLD accepted that paragraph 322(5) could not rationally be applied without proof of dishonesty.”

Further, the court held that “it was incumbent on the respondent to consider all relevant factors in the round including those that might support the applicant’s claim that he was careless and not dishonest in his tax affairs.”

We believe that the Judgment will have a significant impact on many Applicants who are pursuing their Judicial Review claims or Appeals, where there was an allegation of 322 (5).

As stated by the UT Judge in Mr S’s case “Judicial review is a discretionary remedy. In deciding whether to grant relief, it is necessary to consider the decision as a whole. The courts have repeatedly emphasised the importance of a decision to refuse settlement and the serious nature of an allegation that an applicant has used deception. A finding of deception can have a long-lasting impact on an applicant’s ability to make further applications for leave to enter or remain.” 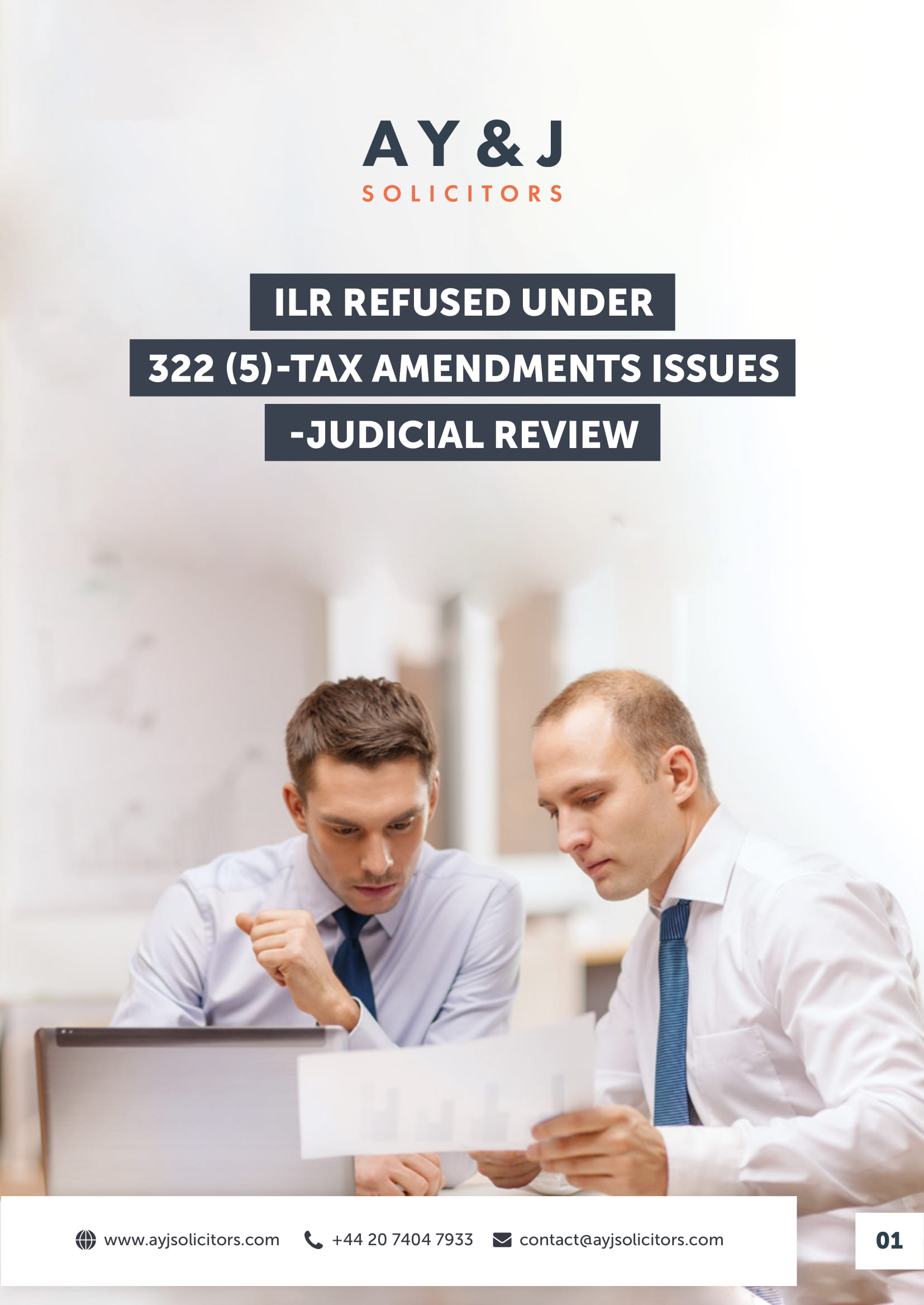