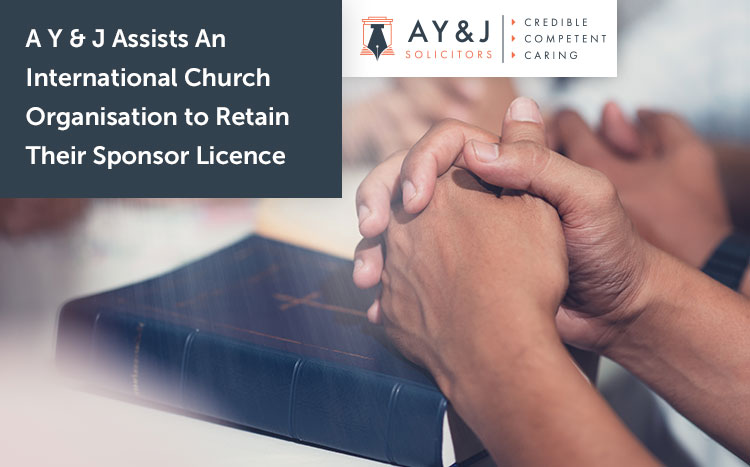 A Y & J were recently approached by an international church, GHM, seeking advice following the suspension of their Sponsor Licence after a compliance visit.

They had held their Sponsor Licence since 2014 and, believed they had adhered to the sponsor licence obligations strictly since that time.  The loss of their Sponsor License, and subsequently their ability to sponsor staff meant they would be unable to reach out to their core community in London and run services.

How A Y & J Assisted GHM to Retain their Sponsor Licence

To secure the recovery of GHM’s sponsor licence, it was necessary to work through each allegation and in turn  provide evidence to the contrary to the Home Office.  This was achieved by doing the following:

Allegation 1: Failure to keep records of the recruitment process

According to the Home Office, GHM had failed to comply with strict record-keeping and recruitment processes, the purpose of which is to ensure that offering a job to a migrant worker does not deny the role from a suitable settled individual.

Looking in more detail, we found there was an apparent failure to retain evidence of the job advert.  In reality, GHM were unable to retrieve a copy of the job advert as it had been posted on Universal Job Match before the switch to the newer portal: FindaJob.

The Home Office also stated GHM had failed to retain copies of interview notes from short-listed candidates.  Unfortunately, when we looked closer at the case in question, it transpired they had offered a position to a migrant worker who had not even applied for the job.   The recruit had been ‘head hunted’ for this job role with a recommendation of their Head Pastor.

How A Y & J resolved allegation 1

In order to overcome the above allegations made by the Home Office, our lawyers provided detailed submissions with relevant evidence and argued successfully that GHM met the overarching principle of Tier 2 and 5 policy guidance by not displacing a suitable settled worker.

The Home Office further stated GHM had not undertaken the required DBS checks.  For any sponsored worker who will interact with children, the Sponsor must have an enhanced DBS check completed, with the findings being retained on the Sponsored Worker’s personnel file.

How A Y & J resolved allegation 2

We provided written submissions addressing the issue and successfully explaining the actual and/or mitigating circumstances of the Sponsor failing to retain the records of the recruitment process.

The Home Office believed that GHM had failed in its Employment Law obligations, including not paying its sponsored worker the National Minimum Wage (NMW).

How A Y & J resolved allegation 3

A Y & J Solicitors were successful in addressing this issue, explaining an oversight by GHM and that the corrective measures had been taken to remedy the error.

The alleged breach of their Statutory Duty turned out to be, as discovered by A Y & J Solicitors an error in the Employment Contract, which again, was remedied to the satisfaction of the Home office.

As Sponsors should know, you must not share your SMS user ID and Password.  The Home Office accused GHM of sharing this confidential information with their sponsored worker in breach of their sponsorship duties.

How A Y & J resolved allegation 4

With our understanding of the facts of the situation and the law, A Y & J successfully demonstrated that this breach had never occurred and put forward what was a plausible explanation to address this issue.

A common allegation is a failure by the sponsor to carry out prescribed right to work checks.  The suspension letter set out the primary concerns that GHM did not have an effective system in place to monitor the right to work of all of their employees.  The suspension letter listed GHM’s failure to retain a copy of the prescribed documents for 14 individuals employed by them.

How A Y & J resolved allegation 5

A Y & J’s expert knowledge in this area allowed us to refer the Home Office to their own guidance in ‘An Employer’s Guide to Right to Work Checks’ by pointing out that GHM was not required to retain passport copies of the volunteers.

GHM had Their Sponsor Licence Reinstated

With our expert knowledge, guidance and support, GHM retained their Sponsor Licence despite the numerous complex allegations made by the Home Office.

Had GHM had regular compliance checks carried out by an expert they could have avoided the stressful situation they and their sponsored workers found themselves in.

Save yourself time & money – come to A Y & J Solicitors for advice and assistance on all of your Sponsor Licence compliance needs!