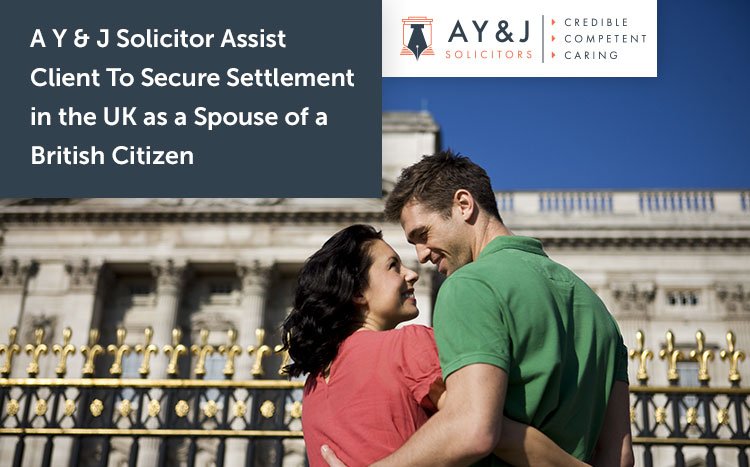 Mrs A met her husband, Mr B, a British Citizen, in her country of origin.  The couple married and continued to live overseas for a few years before deciding to relocate to the UK.  They instructed A Y & J Solicitors with the initial entry clearance application and a subsequent extension spouse application.  Both applications were successful, and Mrs A later returned to us to assist her in applying for settlement as a spouse.

How A Y & J Solicitors Helped Mrs A to Achieve Settlement

Firstly, before proceeding, we needed to check Mrs A satisfied all the requirements of the Immigration rules set out in Section R-ILRP of Appendix FM.  One of the most important aspects of these are the financial requirement.

Mr B worked for a company as the head of his department.  His gross annual salary was more than sufficient to meet the minimum income requirement of £18,600.  However, during the preparation process, Mr B’s company was sold, forcing him to leave his role.  Due to the change of circumstance, we discussed the option of relying on Mrs A’s income from her self-employment.  We advised her on the evidence needed to prove her income.  However, upon reviewing this evidence, it was clear that Mrs A’s income was not enough to meet the requirement.

We met with both Mrs A and Mr B to advise them of the situation and to try to find a solution.  During our meeting, we discussed the financial circumstance of both Mr B and Mrs A in detail.  Mr B told us that he was due to attend a final interview with a new employer and was confident he would get the job.  He also advised us he had investments outside of the UK which he had held for over ten years.  Now in possession of this new information we advised Mrs C that there were two options; 1) if her husband did take up the new employment (with a salary exceeding the minimum financial requirement) she would be able to rely on his income, failing which, 2) they could rely on Mr B’s  cash savings if he liquidated £62,500 from his investments and placed the money in his bank account.

Unfortunately, Mr B did not get the job as hoped. This left option two; liquidation of investments.  We provided a comprehensive list of documentary evidence that would be required to demonstrate that the financial requirement was met.

Indefinite Leave to Remain (Also Known as Settlement) was Approved

Once all of the evidence was gathered and reviewed, a Super Priority Service appointment was arranged for Mrs B.  We uploaded the evidence, including our legal submissions to the application centre in advance of the appointment.

The following day we were delighted to tell Mrs A that her application had been approved.

We look forward to assisting Mrs A in the next step of her immigration journey – the final step – naturalisation as a British Citizen.