Tier 2 sponsors are finding it harder to keep their good sponsor ratings as UK Visas and Immigration (UKVI) conducts increasing numbers of compliance audits. Statistics show that these audits are leading to more sponsors finding their licences suspended/revoked, and their entire skilled foreign workforce in jeopardy.

Now that Article 50 has been triggered and the UK will be leaving the EU at some point, it is imperative that organisations who rely on talent from foreign workers are able to recruit them in the future. Even famous businesses such as Fortnum and Mason have reported they are struggling to recruit staff. Chief Executive, Ewen Venters told The Guardian:

“Brexit is an alarming issue for me in terms of our ability to hire and retain good people. The collapse in the pound’s value means wages sent home to relatives are worthless.”

For those businesses that have a Sponsor Licence, the increase in unannounced Home Office visits and overwhelming duties and responsibilities mean that many organisations are having their licences revoked. If this happens, there is no right of appeal and the only avenue available to reverse the decision to revoke the Sponsor Licence is Judicial Review.

What is Judicial Review (JR)?

When all other legal options are fruitless, a Judicial Review (JR) may be the only remedy for a Tier 2 sponsor business that has had their licence revoked. JR is a legal process whereby the Administrative Court or the Upper Tribunal (Immigration and Asylum Chamber) examine the Home Office’s decision, to determine whether the decision was reasonable, lawful or fair.

It’s important to note that the only question a JR answers relates to the legality of a decision. Fairness or other such concerns are not addressed (except for cases of procedural fairness or breaches of natural justice). As explained here on the gov.uk site, a JR is looking for the procedural correctness of a public body decision.

In the case of a Tier 2 sponsor licence being revoked, a JR may be an appropriate measure to undertake if UKVI (a branch of the Home Office which deals with immigration matters) did not provide an adequate reason for the revocation, or the compliance officer made allegations, which you believe were unfounded.

JR is a complex legal procedure, therefore an involvement of an expert immigration law solicitor who is SRA (Solicitors Regulation Authority) approved is highly recommended. A strong case can often be successfully resolved in the early stages of a JR.

What are the stages of a Judicial Review (JR)?

A Tier 2 sponsor license holder who has had their sponsor licence revoked must first carefully review the reasons why the licence was revoked. This will be found in the letter sent to the organisation following the compliance audit.

The next step is to review the laws at the time of the revocation. An expert immigration law solicitor will be able to determine whether the revocation was within legal boundaries. It is crucial to act quickly, as there is only a brief window of time to take action in these cases.

Judicial Review is a remedy of last resort. All other possible avenues to resolve the dispute between your organisation and the Home Office must be explored before an application for Judicial Review can be made. If appropriate, your immigration solicitor may try and negotiate with Home Office officials to reinstate your Sponsor Licence. Should this fail, your only option will be to challenge the decision via Judicial Review.

All evidence must be gathered in defence of the case, as only the strongest of cases will be considered by the judge for JR. Appropriate evidence includes proof of any damaging financial impact to the organisation in the event of revocation, documentation, witness statements, and any other concrete evidence in support of the organisation’s position against the UKVI decision.

At this point, an attempt must be made to negotiate an agreement with UKVI. This is done through a ‘letter before claim’ which is drafted by your immigration solicitor stating your position and an explanation of the invalidity of the revocation.

Should UKVI fail to respond, or respond unfavourably, the next stage is to apply for permission for a JR through the Administrative Court. The application is critical to the success of the JR and must include evidence that UKVI did not act in compliance with the sponsor licence requirements. This stage can often encourage an offer of negotiation from UKVI that may indicate a withdrawal of the revocation, reinstatement of licence, or negotiation terms.

It’s in UKVI’s best interests to seek an amenable settlement. Failure to succeed in cases of JR often leads to costs awarded to the winner and is a great deterrent to the proceeding.

UKVI must file a response within 14 days against the letter before claim. If they do not attempt resolution at this stage, it is up to the judge to decide if the case will proceed based on the legal merits of the evidence submitted.

During a JR hearing, both sides fully present their case to the judge. A decision is granted a few weeks after.

Why is Judicial Review (JR) important?

It’s important that UKVI is always held accountable for the decisions they issue. All staff representing the UKVI in any capacity must obey their legal duties. Taking action against UKVI in the form of a Judicial Review (JR) is the last resort to have a revoked Tier 2 Sponsor Licence reinstated, in cases where UKVI has acted unlawfully. Also, successful JR cases often result in the Home Office changing their policy to remove unlawful procedures.

A Y & J Solicitors have experience with getting revoked Tier 2 sponsor licences reinstated through the process of Judicial Review. If you’ve had your licence revoked, please contact us immediately as time is of the essence. We’re here to help. Contact us on +44 20 7404 7933 or email us at [email protected]. 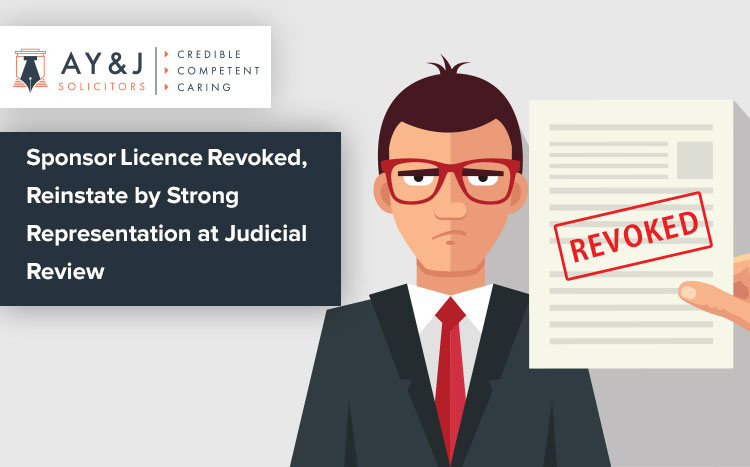 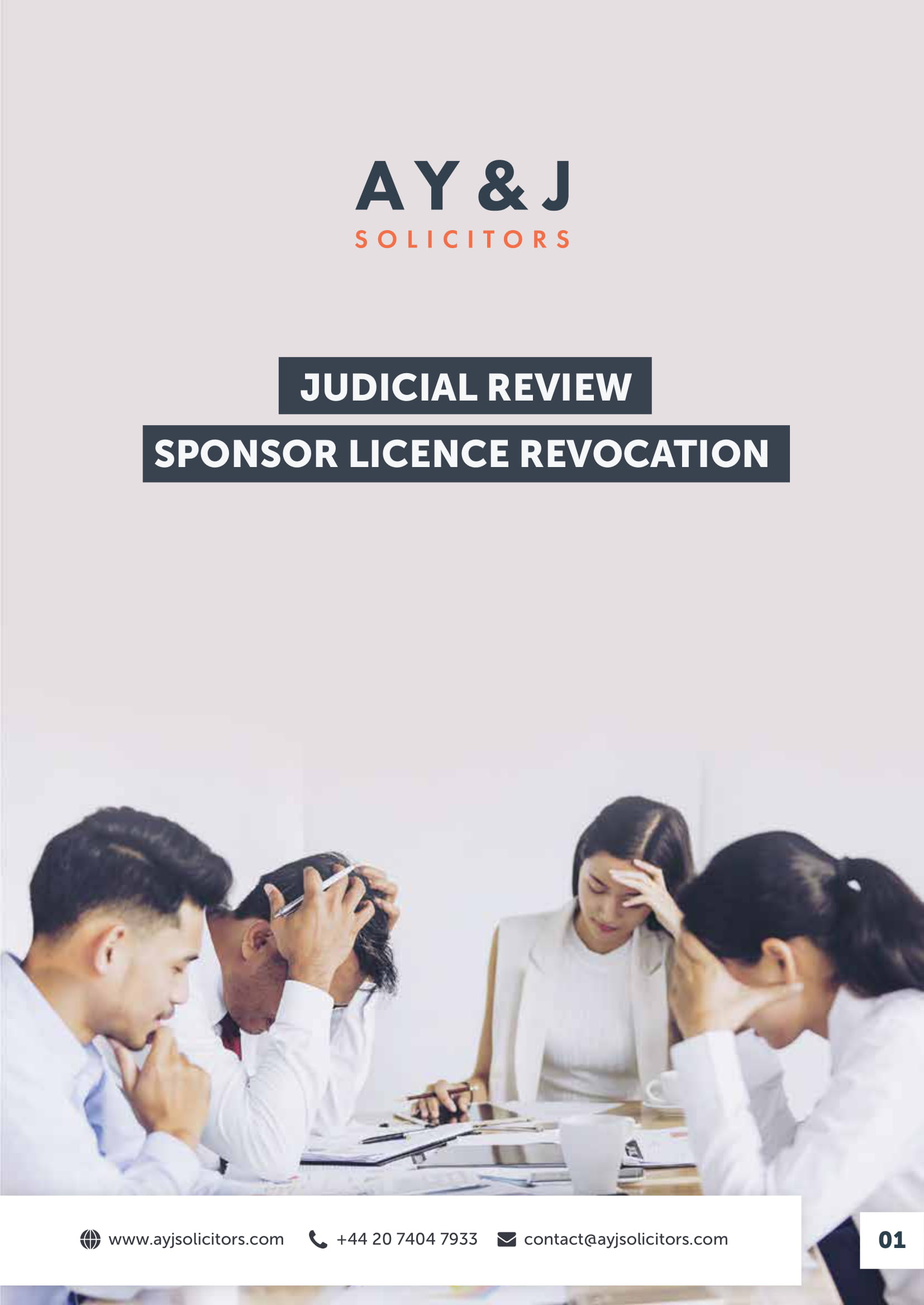