Can I Obtain Settlement As The Family Member Of A Diplomat?

The Immigration Act 1971, section 8(3) provides for an exemption to immigration control to diplomats and their family members who form part of their household.  But what happens after a diplomatic post ends, or if the family relationship breaks down (as in divorce).  Do the family members have to leave the UK, or can they apply for Indefinite Leave to Remain (ILR)?

Fortunately, family members of diplomats may be able to apply for Settlement based on long residence.  The guidance on ILR states:

Qualifying criteria for ILR through long residence is strict.  According to the guidance, those applying must:

A successful applicant must show they have resided in the UK lawfully for ten years continuously.  This does not mean an applicant cannot have dipped their toe outside Britain’s borders during the previous decade.  Rather, the continuous residence is defined as not having been outside the UK for more than 540 days during the last ten years’ claim period.

Continuous residence is broken if the applicant has:

There would be exceptions if you had to spend longer outside the UK on compassionate grounds.  However, UK Visas and Immigration (UKVI) have a high threshold in place.

There would be exceptions if you had to spend longer outside the UK on compassionate grounds.  However, UK Visas and Immigration (UKVI) have a high threshold in place.  If you cannot meet the continuous residence requirement, it is imperative to speak to an immigration lawyer to receive the best advice on the next steps to take.  They can write a letter to UKVI detailing the reasons for your absences from the country and why compelling or compassionate grounds circumstances means discretion should be used.

It is important to note that time spent in the UK exempt from immigration controls (which is the case for diplomats and their household) is counted as a lawful residence in the country.

Once the period of exemption from immigration control ends, diplomats and their families are given 90 days ‘deemed leave’.  At the end of this period, they must either apply for further leave to remain or ILR or depart the UK.  If an application for leave is submitted, their period of lawful residence continues throughout the 90 days.  However, remaining in the country but failing to apply for further leave after the expiration of 90 days will result in continuous lawful residence being broken, and of course, you become an overstayer.

Family members of diplomats may be eligible to apply for Settlement in the UK under the long residence route.  If you believe you are entitled, contact an immigration lawyer as soon as possible to ensure your continuous lawful residence remains unbroken.

A Y & J Solicitors an award-winning immigration law based in central London can assist you and your family members in securing settlement.  If you would like more information regarding applying for ILR via the long residence route, please contact us at [email protected] or call +44 20 7404 7933.

Linkedin
Previous BlogAvailable Options For Hong Kong Nationals To Immigrate To The UK
Next BlogWhat Is A Resident Labour Market Test? 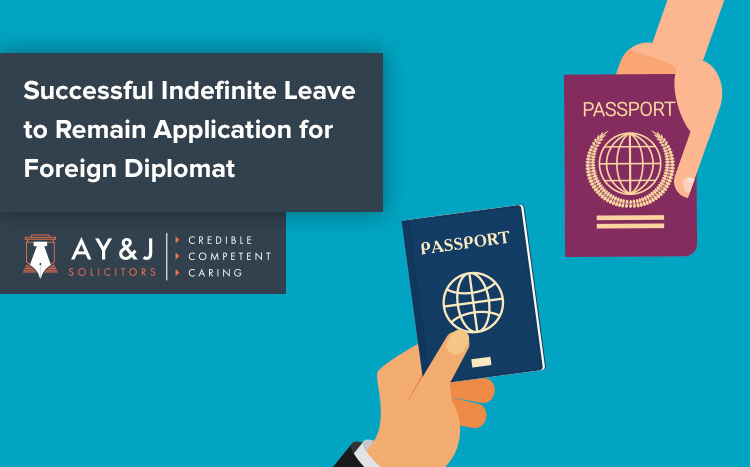