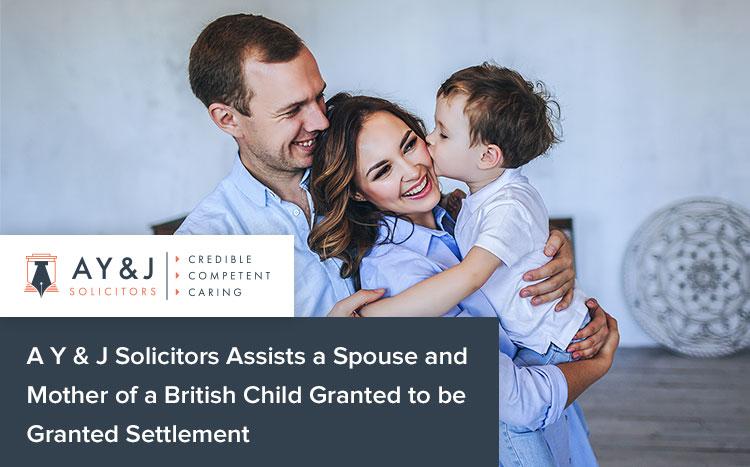 After that, Ms B applied for Further Leave to Remain as a spouse, which was granted on 14 January 2013 and valid until 14 January 2015. Unfortunately, the relationship between Ms B and her husband broke down.

Ms B and her ex-husband had a son together who was a British citizen.  The child lived with Ms B.

How we Helped Ms B apply for Settlement

We prepared and submitted Ms B’s application for Indefinite Leave to Remain (ILR) based on Ms B completing five years in the UK as a parent of a British Citizen.  We informed Ms B that she qualified for ILR as she would complete five years’ continuous lawful residence on the parent route on 30 October 2019; however, she also had the option of applying 28 days before the qualifying date. Therefore, the earliest date she could apply for ILR was on 3 October 2019.

We informed Ms B that the requirements which must be met for a successful ILR as a Parent application. We assessed Ms B’s circumstances. We then informed Ms B that she met the financial and accommodation requirements.  Ms B also obtained a qualification for the relevant English Language conditions and passed the Life in the UK test.

We carried out the following work on Ms B’s matter, for the preparation of her Indefinite Leave to Remain application.

We made clear to Ms B that if she had any criminal convictions, her application for Indefinite Leave to Remain could be refused. We also informed Ms B that she may also be refused under Paragraph 322 of the Immigration Rules if she had ever made false representations or failed to disclose any material fact to the Home Office or failed to comply with conditions attached to any previous grant of leave to remain.

Result: The Application was Approved

We submitted Ms B’s application, and she was granted ILR. We ensured that the process was smooth and simple, and Ms B was elated with the outcome. This complex application was made simple by our experienced and dedicated lawyers.